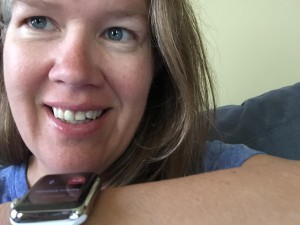 The Apple Watch has arrived. With a bit more fanfare than the Google Watch. Three identical white boxes housing the watch. Seriously, Apple? Apple product designers have taken their fetish for minimalism – but not utilitarianism, ironically – to a new level. After unboxing, then unboxing, then unboxing again, I tried to start it up and was disappointed. This was vastly different than my first wearable, the shuffle, and how simple and direct that was to get started. No, I had to sift through instructions and read online, then figure out that my phone hadn’t the right app, and my appleID was wrong, then read some forums on what others did, then finally, figured out how to sign up under the proper AppleId. It was a downer. I don’t have a unique AppleId problem, if you’re wondering. Just writing AppleId so many times makes me cranky.

After that, things were great. The interface is far easier than Android’s, which merits its own post. I got started right away with texting. As a mom, this is super, super key. Reid’s dad complains all the time that I don’t reply to texts and calls fast enough- we’re talking hours. I have to literally remember to get my purse out of the stroller and get my phone, to check. So right off, I knew this would be great and it was. A usually hectic Friday – I was reminded (by the watch) after baby’s nap that he had his music class in two hours. The calendar notifications on the watch face are a single line of text, which are nicely simple and clear. Then, a few chats while we walked to the park, with a mommy friend about meeting up at the right class. All done on the watch with voice-to-text.

After class, Reid’s dad and I had a few chats, while I was hiking up Telegraph Hill getting some exercise in before dinner. We figured out what we wanted, coordinated grocery lists and managed to make a rather ambitious- and delicious- dinner of fried chicken that night. So, I can honestly say it’s ratcheted up my ability to multitask and squeeze things in. That is super key to all the juggling required in parenting.

Can I do all this with a phone? How is it different using a watch? It’s a bit more personal and easier to hear and get notifications. It’s easier to view and easier to read. It’s smaller and simpler. The real applications that I use constantly- texting, email, calendar, time- are all there front and center. There’s a lot more voice to text since there’s no keyboard (yes! I suck at tap-typing.)

Some other thoughts:
The activity app is a bit confusing and I’m not sure I like it more than the FitBit. It doesn’t tell me how the goals were setup. My beef with a lot of these wearable metrics are that they’re global and not personal.

The texting app is good but does take some getting used to- you can reply with one or two taps, but initially I thought it was too tappy.

The ability to navigate the app is really good- two buttons, you can view all apps quite quickly (not so an Android). Your top friends is one button click away, which isn’t critical for me. I’m surprised that merits its own button. I see it as a cheap plug to be more social, perhaps. Phones are personal by nature.

FaceTime was confusing. The watch is an accessory to the phone. Thing is, I think most of us want it, or expect it, not to be tethered. That was my assumption and I have to keep reminding myself that it’s not standalone. So FaceTime, the music app, etc. is just triggering activities on the phone. 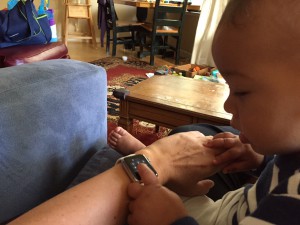 I have AppleTV and using the watch as a remote is pretty awesome. It did take me a half hour to setup, and my partner was not impressed. He will, though, when I started switching channels on him!

Physically, it’s heavy and clunky and yells “400 Dollar watch!” I created a stir at my son’s music class. Having to wash your hands ten million times a day with a toddler, it’s not very practical. I did the dishes with it on accident last night. Luckily, it survived. Still, that’s quite a risk to run with an expensive watch.

I have only played with the Apple apps, I’m still working on making my own and updating my apps with watch-ready apps.

So far Reid hasn’t done anything too awful by tapping on my phone. It’s now his favorite thing to play with during diaper changes.