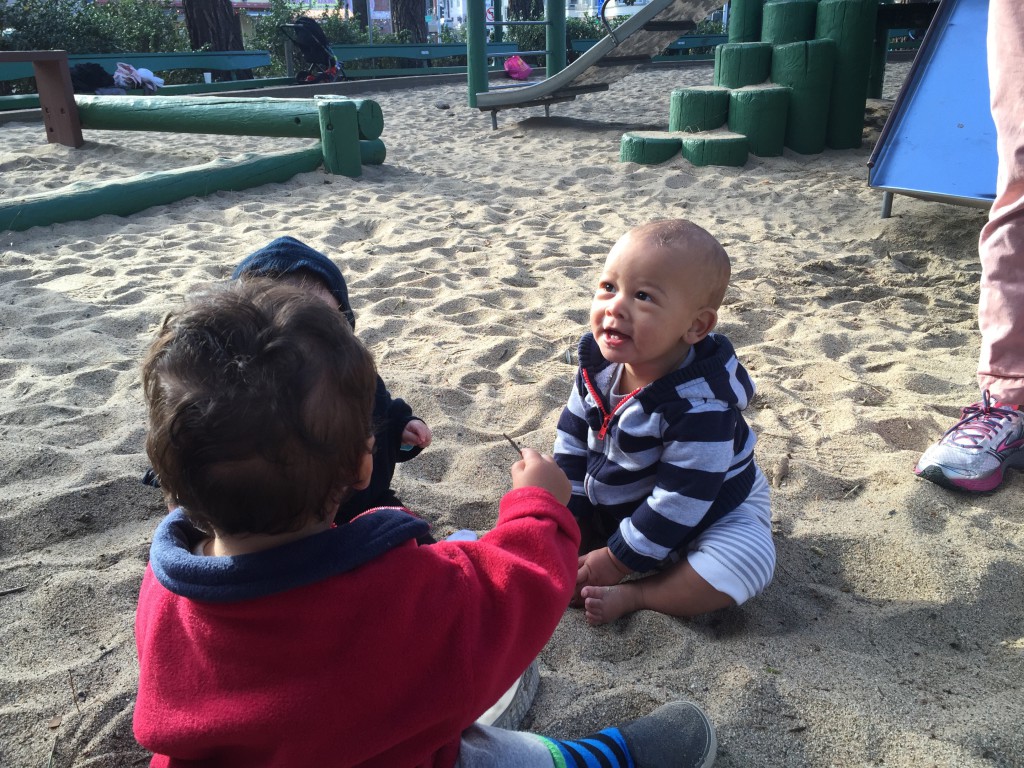 Jax put a handful of sand in his mouth, and I should have reached over and grabbed his chubby little hand, but I knew that with only a few taps, I could almost finish my deposit. The deposit that would make or break my rent check. I stretched my foot out to nudge his hand away from his mouth, and finally tapped through the goddamn awful banking app to get the deposit done. Every bank advertised they did this, but it was like pulling teeth getting her crappy credit union to finally setup mobile deposits. Getting downtown with baby in between naptimes was monumentally difficult, as was finding a non-skeazy place to breastfeed before his nap. Once she had stopped at what she thought was a nice bench under a tree on Montgomery, but no, it was the designated smoker’s club, and she got anxious and guilty looks for the entire 10 minute feed (fast, for her and Jax). She was tired of jockeying for the sidewalk ramps between oblivious 9-5ers on their one 15 minute break out of the skyscrapers. It’s like her stroller, in a crowded sandwich shop, had leprosy the amount of dirty looks she got. So, fine. She didn’t want to go downtown anyway. Sniff.

Being a stay at home mom (SAHM, for those that don’t know.) wasn’t her first choice. She thought, before having a kid, that she would bounce right back to work. But, she lost her job during maternity leave. She was sure that was illegal, but talking to a lawyer, he had told her a million ways her case was weak. She her husband was the sole income earner, they were using savings and retirement, and she was trying to figure out, amongst all this, to be the centered calm person who doesn’t worry about money. She got one or two contracting gigs to balance it all, but still, she is also balancing the guilt of not wanting to be a SAHM. Or, is she wasting these precious years with worry? Oh great, another thing to worry about.

San Fran-cheesy is not a good place, or really a realistic place, to be a single-income family. “SIK” single-income-kids, speaking of acronyms, it is a place to be DINKY (double-income-no-kids). So, she penny pinches and buys hand-me-downs, and filed for unemployment. She cooks in, never goes out. Which is remarkably easy to do in North Beach since she and her husband refuse to pay for pasta, possibly the simplest thing to make. She spends her time in the park (free), playdates (free) and cooking (um, kinda free). These are the salad days, she says to her slimming figure. Cough.