Inspiring Makers- and Getting Inspired, Our GHC Hardware Hackathon Workshop 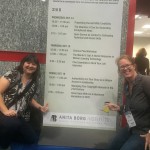 Stacie & I making sure we’re on the room’s agenda… and we are!

At the 12,000 participant Grace Hopper Convention in Houston, TX last week, we conducted a hackathon-with-a-workshop. Stacie Hibino (@staciehibino) and I helped 250+ participants manipulate a simple LED circuit kit into a prototype or actual product.

Our competition was stiff for that slot, and it was at the end of the conference. But we’d attended earlier workshops on this topic and they were packed, and to capacity. The thirst for building was strong here. Folks wanted to *make*. I got a few questions before the session whether they’d “actually make something” and if it was “truly interactive.” Oh yes.

Not only that, but we had a demo round and judging! First, we introduced the kits we made, and Stacie demonstrated some flying, moving or switch examples she’d made with the kit. Then, a 5-10 minute brainstorming session. Tables pitched ideas, and we opened it up to moving to other tables- though most didn’t. 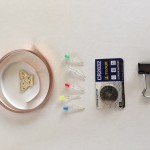 We distributed the kits to eager hands. It contained a strip of conductive tape, a few basic LEDs, Chibitronics LED stickers, a battery, and a granny purse clip to hold the battery to the circuit. Generous donation by Chibitronics- whose stickers are awesome, and their instructions and guides are truly great. If you’re an educator, I highly recommend the workbook and kit for your own instruction and play ($30) and the classroom kit is very good too! 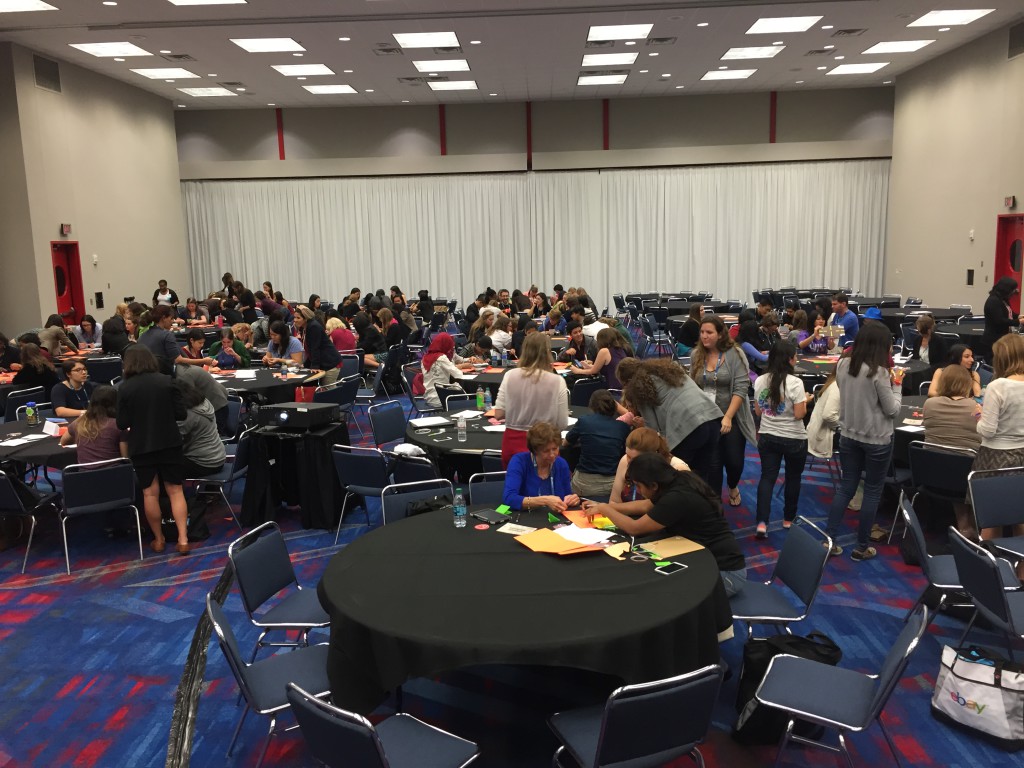 Just got the kits- building has started!

I walked around to some tables and saw that a lot of them were actually building what they’d pitched- so that was nice that our instruction on the materials matched their idea, at least. Folks were hunkered down, it was some serious concentration. We couldn’t give kits to each individual but a few per table, which is good in a way because it drives group participation. We really looked at that in judging- that the group worked as a whole. Since this was about putting on hackathons, we wanted to express the feeling and excitement of being in one, as well as the benefits of participating. Usually you learn something about yourself, pick up new skills from your teammates or even hidden skills in yourself!

We found out that we didn’t have another session so we pushed the time out about 15 minutes. One of the conference staff brought food from the hallway in- folks were so engaged they didn’t peel off to eat. Now, that is a really good sign, since there was a bit of food scarcity at this conference.

I polled the room and a few were ready to demo so we brought them on stage! I was super impressed at the presentation skills of each group. The conference attendance skews to young, about 50% college students, and we found that half hadn’t participated in hackathons before. From my own experience, I find it’s very important to get engineers- particularly women- on the mic and up front and center presenting their work to big groups as often as possible. These “soft skills” of presentation end up being super helpful in your career. Presenters gave a quick rundown of what they learned, what was challenging, a team name- often determined on the spot- and onto the next team. No pauses, and pretty much every table presented! Here are some of those demos: 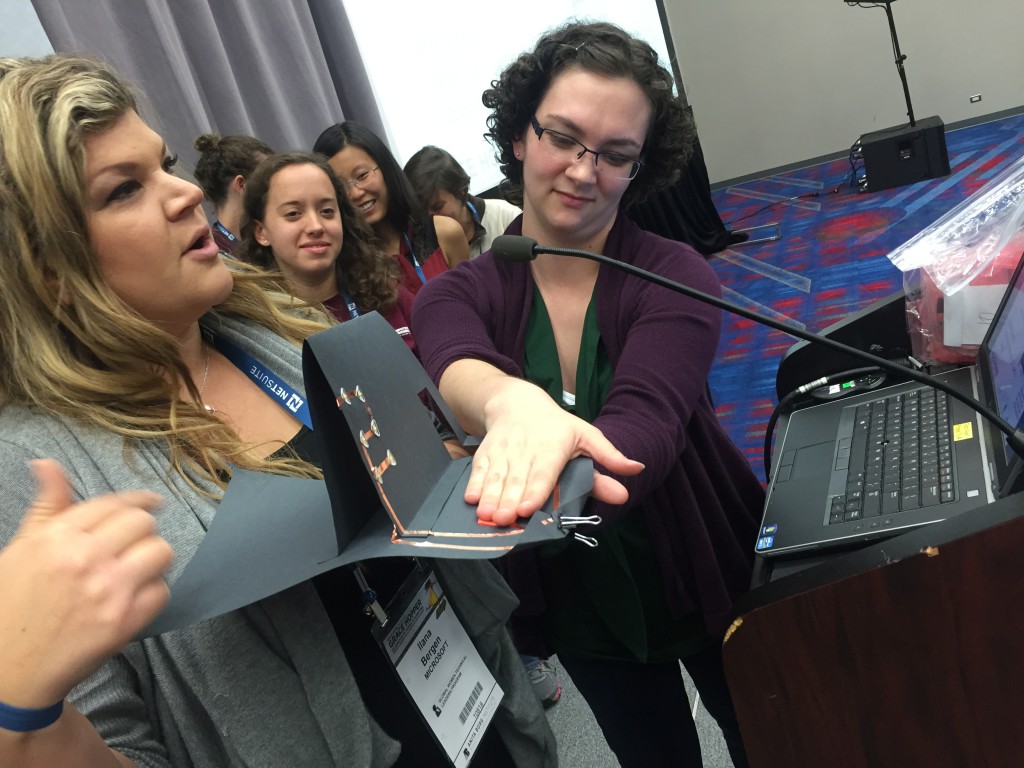 This was a cool miniature for an implementation that would check attendance in a conference room. 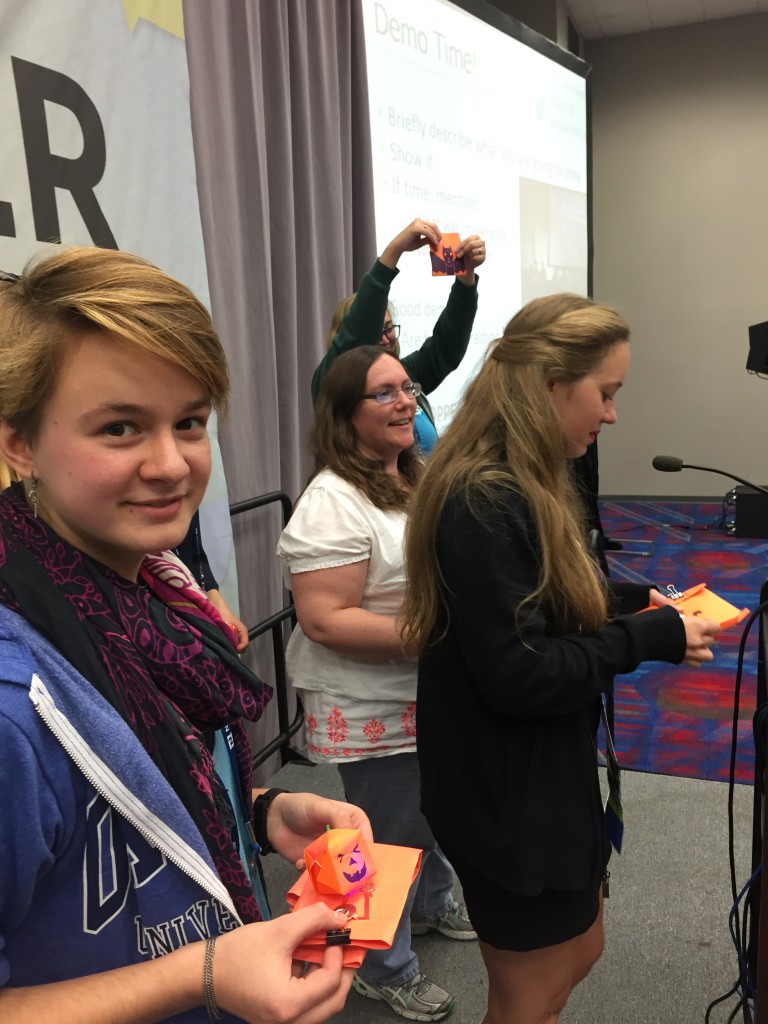 This team cracked me up- they could not finish, and ended up demo’ing three products. 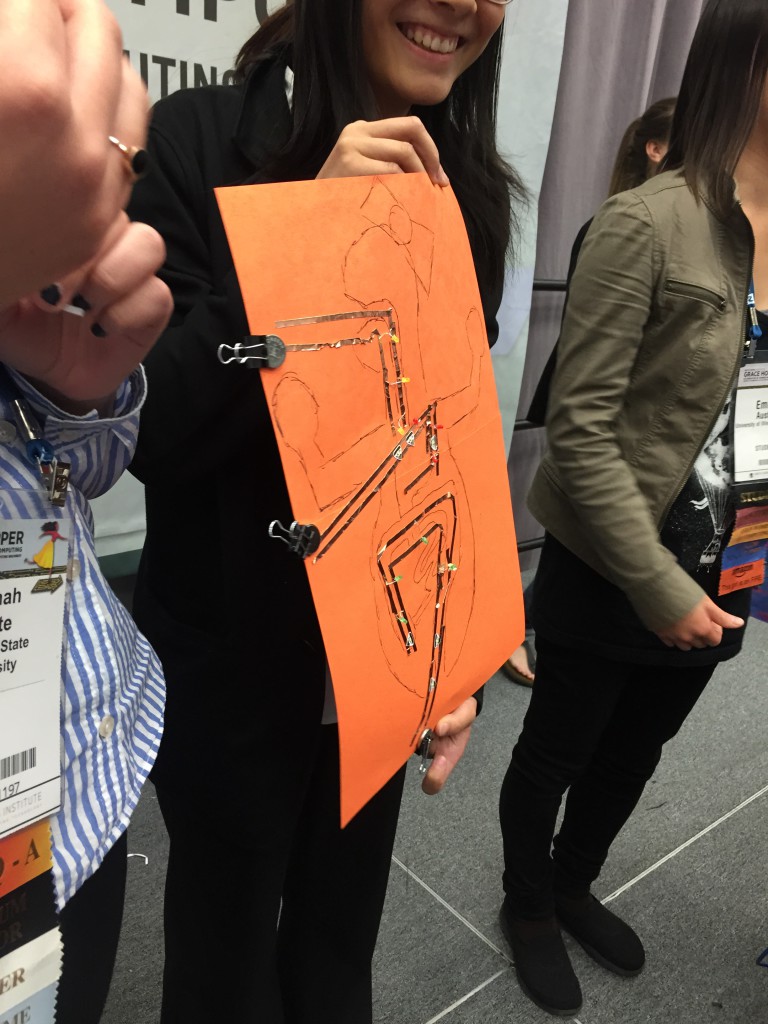 I attempted to name the team for them- “Esophagul Guy” but they went with “Mr. PacMan” instead I think. Lit up different parts of the digestive track in a cool “Operation” style display. 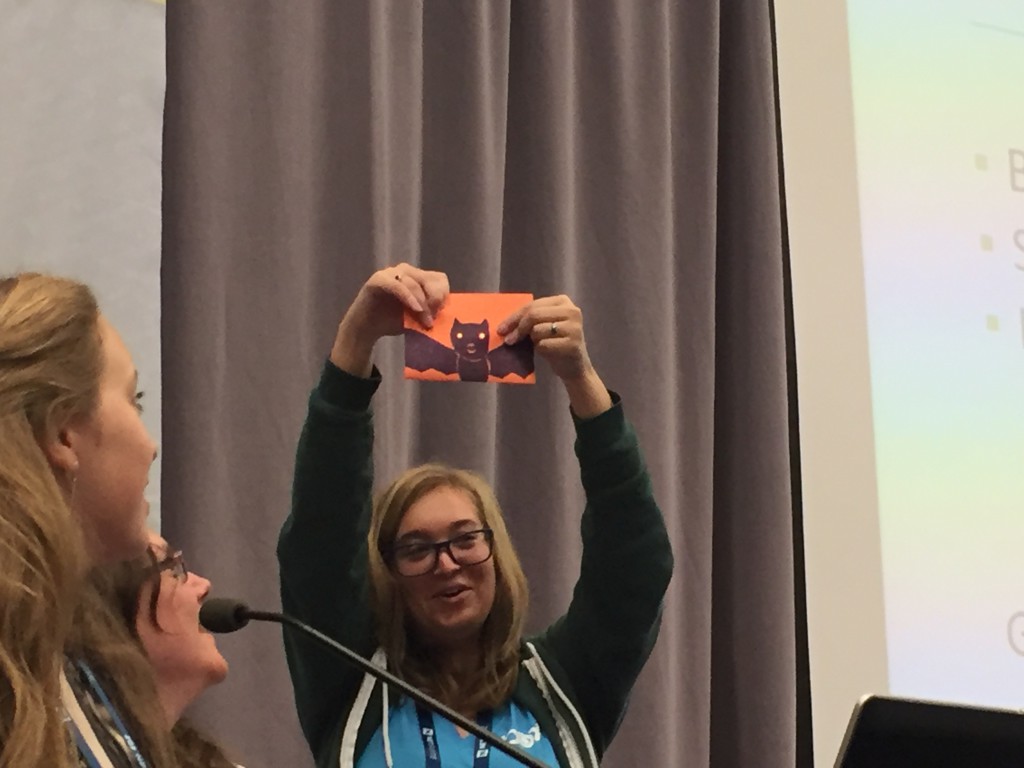 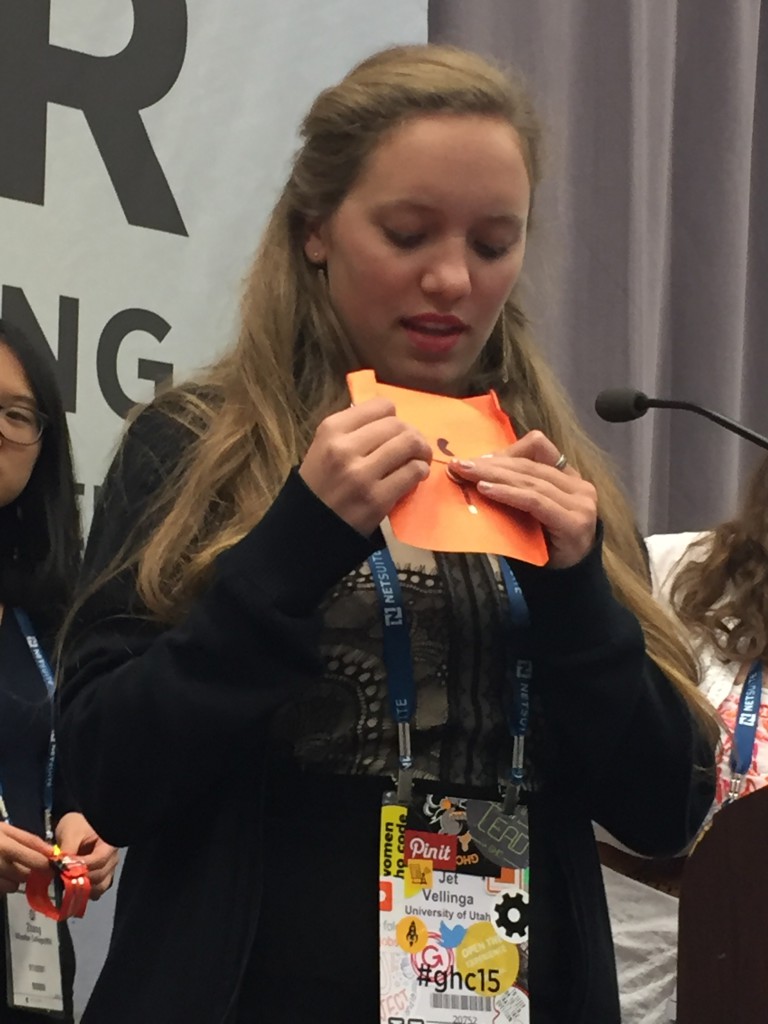 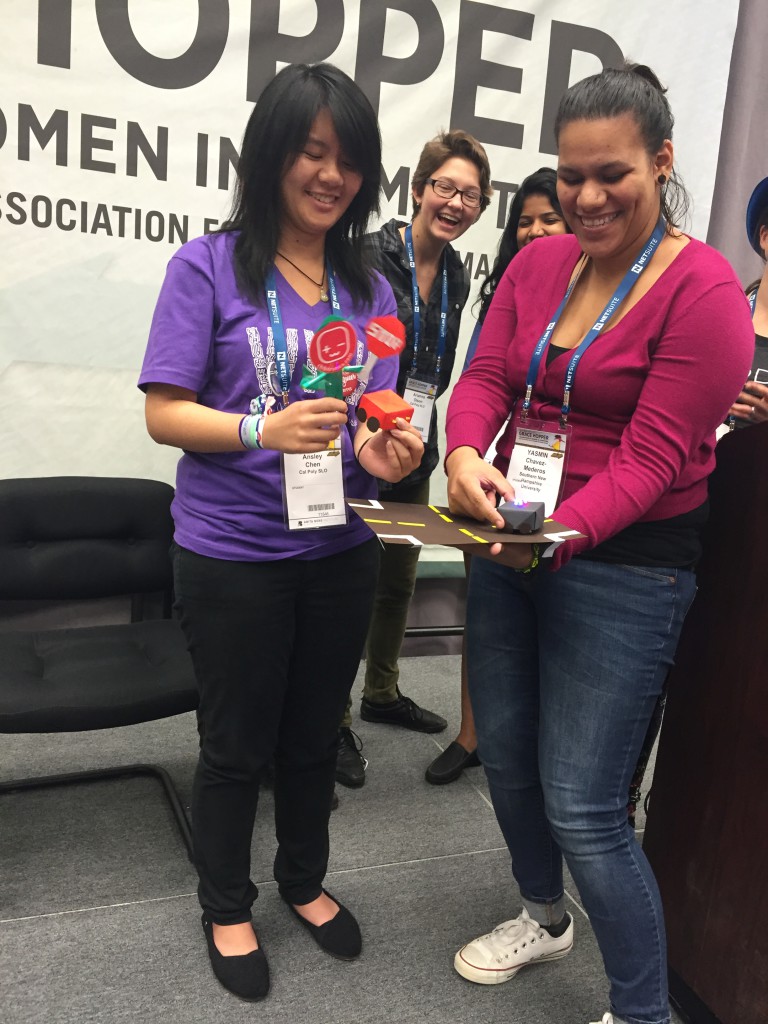 Stacie and I conferred quickly and we decided on the winners- though it was hard, there was a lot of really good teams and even this morning I’m regretting not expanding the prizes, ha. 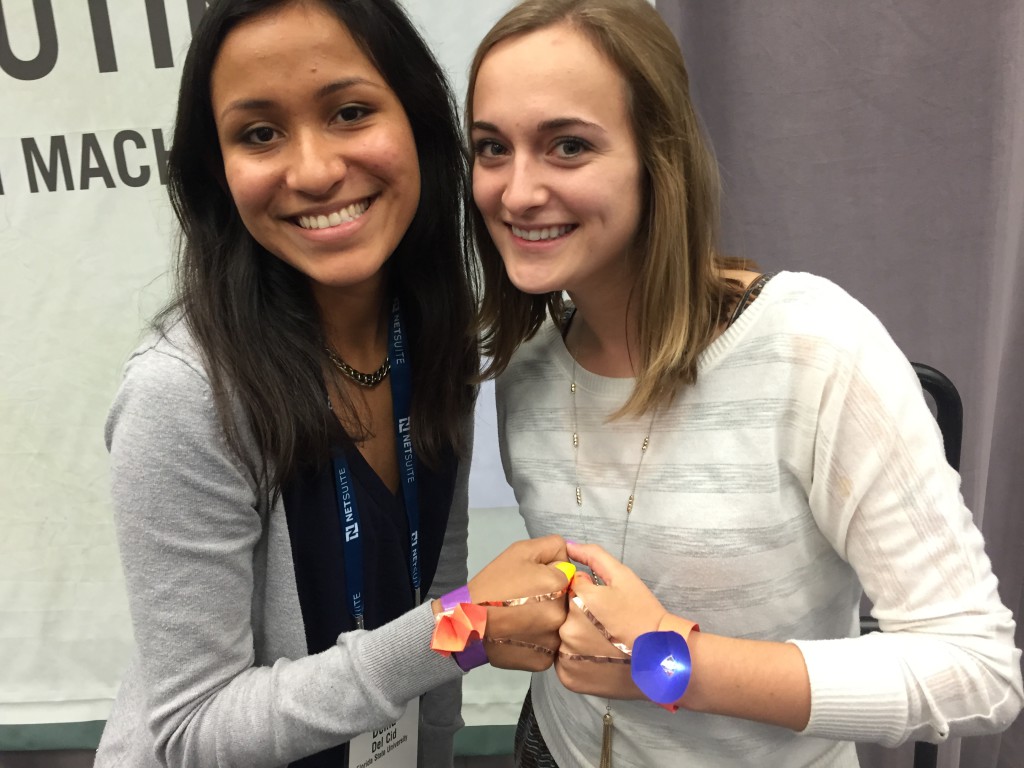 First Place: A “wonder twins” kind of product, that lights up when you fist bump. It worked (check), the team presented was very cohesive and I noticed watching them during that they were working together really well (check) and it was just cool (check). 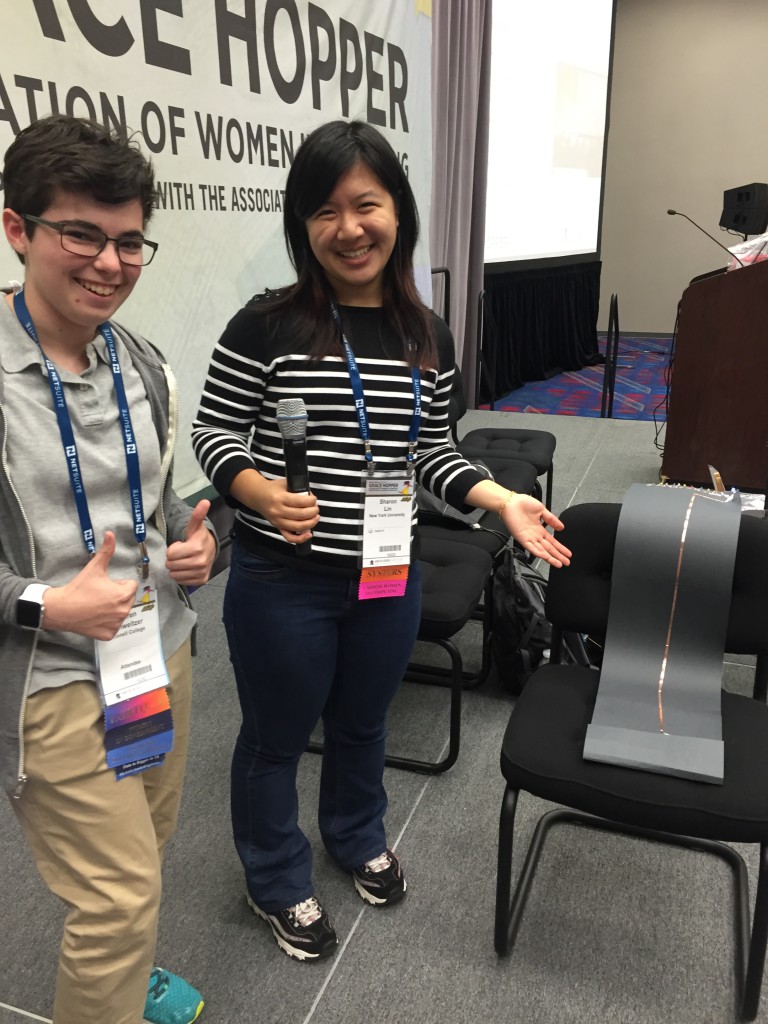 Second Place: Team Smart Sitter: made a chair pad that turns off a light when you sit down. This was full scale, and worked. And, their lesson they learned was right on- they needed to do parallel circuits instead of serial. I liked that it was exactly what they set out to build, which is SO HARD to do at hackathons. Did I say it worked? It worked. Oh, and it was exactly what they pitched, which is so hard to do and awesome. It was cool, and they way they presented I could tell they had a lot of fun and worked together great. Also, very neat. Also practical and relevant to the conference: in big or popular talks, it was hard to find seats. 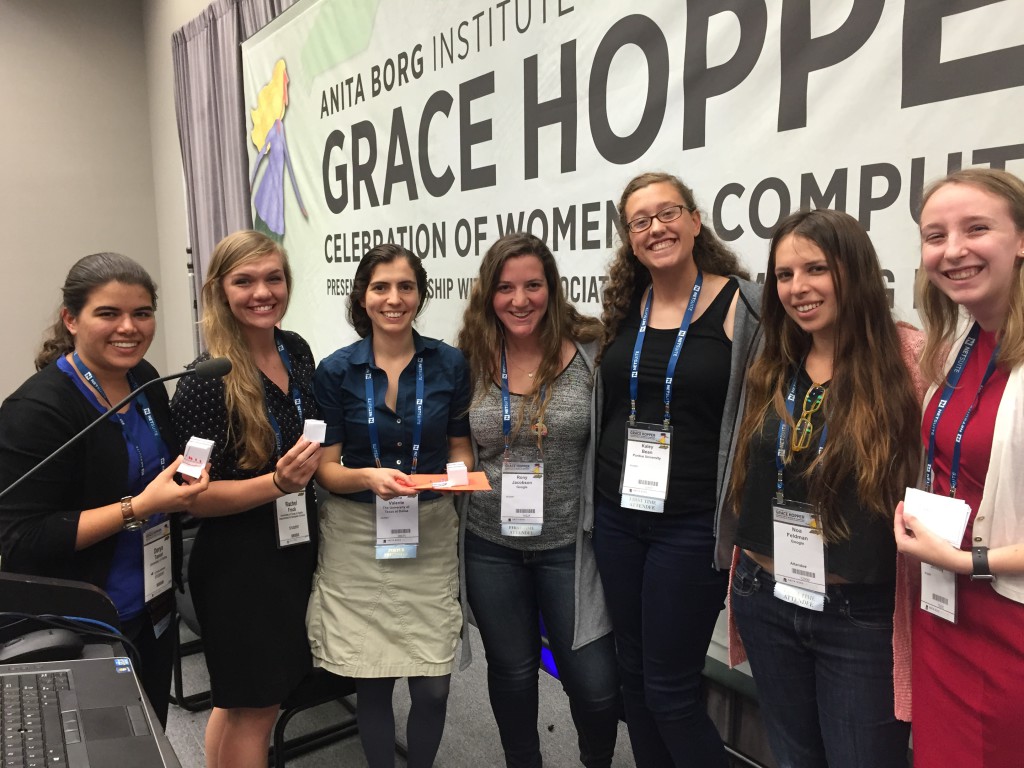 Third Place: A series of boxes that lit up when adjoined. There were a few “box” teams- Stacie demo’d a cool example of lighting up the interior of an origami box that must have inspired a bunch of people. This is a really beautiful product, and the team was huge, and a solid unit, and they didn’t know each before the talk! In fact they barely knew each other’s names, but worked on a project where each person could and did participate – and the result worked. They admitted their challenge and it was a problem that other teams had, that the paper wasn’t heavy enough to make full contact with the tape and conduct.

So if you haven’t gotten the feeling now that the engineers were into it… they were REALLY into it, we offered extra kits to folks if they came up to the stage and even before I finished speaking they swarmed poor Stacie who was handing out kits below me. Ha ha. Our prizes consisted of: lovely Chibitronics holiday card circuit kits, and themed Halloween circuit kits. I was worried that these paled in comparison to fancy smart watches and iPhones (other giveaways at the conference). But when I saw that swarm of bodies angling for these tiny circuit sets, I was no longer worried, oh no. 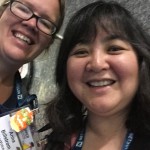 Our prize: a Halloween blinged out badge clip

On a personal note: I was pretty choked up at almost every session or talk I went to. So, I’m a bit emotional, and seeing everyone heads down in our conference really touched me. I was just so impressed with the honest curiosity, teamwork and invention going on in that room. We were all exhausted at the end of the conference, but folks rallied, and made some very cool stuff. Here are some of the creations left over that we couldn’t bear parting with (aw). 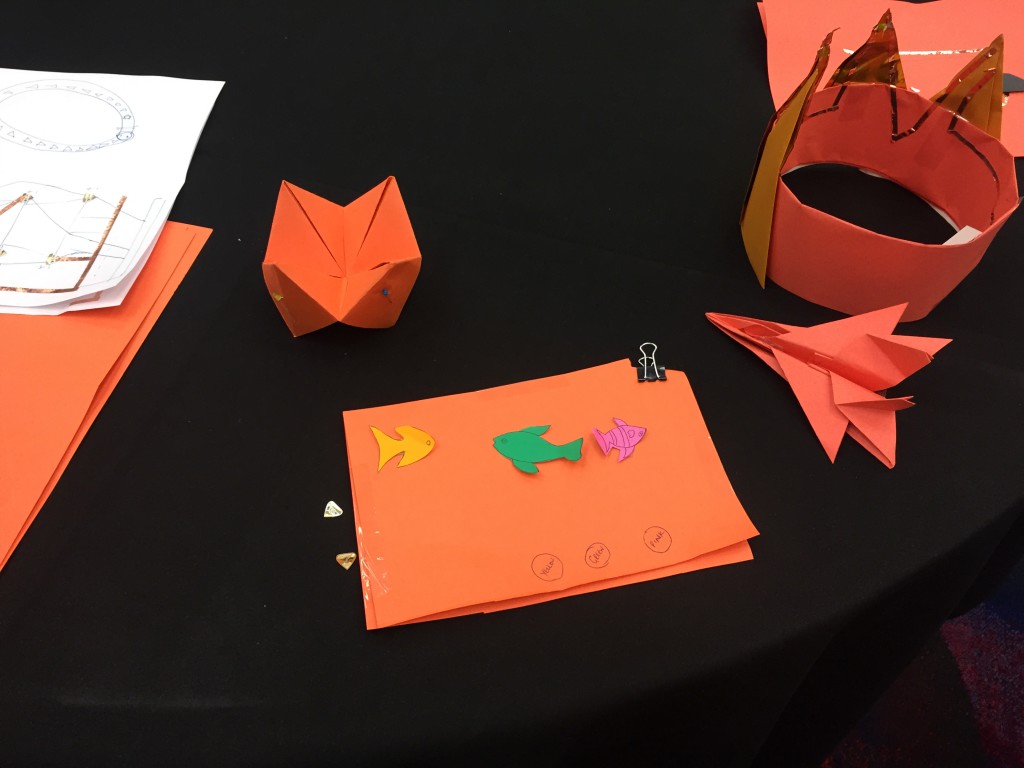 A cootie catcher, a cool fighter jet (!), a working card with fishes, and a light-up crown. 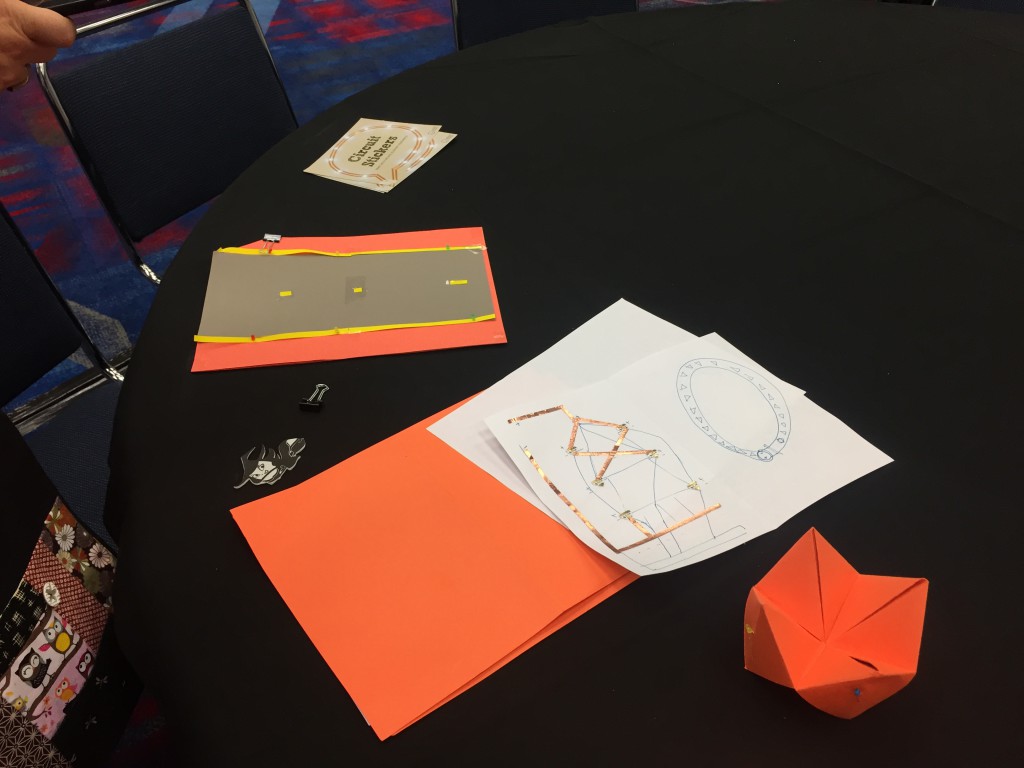 A cootie catcher, a non-working sheet and the traffic game!

Chibitronics– makes very fun, cute LED sticker sets to learn about electrical engineering and make cool stuff! All stickers, most of the batteries were provided very generously by Chibitronics. Their video and materials are very valuable to learning about circuits, and the quality and care of their kits is really good. Thank you so much!

Leyla Noroov & team from the workshop: “Making Makers” – scissors! tape! construction paper! So awesome to meet up with you all and your supplies were really appreciated.

Come Hack With Us: A Hardware Hackathon at GHC from Stacie Hibino