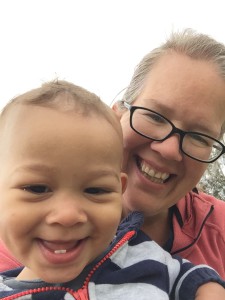 No goose egg… yet

Baby got his first goose egg. I put him in his stroller, turned to get some socks, and Bam! He was face-down on the floor. It’s the worst feeling, for him and me. Poor buddy was silent-screaming, then real screaming, then screaming-nursing, then just whimpering. Maybe 15 minutes? 15 minutes of hell! Why didn’t I strap him in? I always do that, I can’t believe I forgot.

I texted Kevin quickly- he was going to freak out. Kevin’s version of playing with the baby is lightly bouncing him- perhaps an inch or so off his knee. Reid is made of glass, to Kevin. I’m the one who gleefully flips him upside down and yes, once flipped him in the air, a perfect 360 flip a gymnast would be proud of. It was an accident, really. I was on my back on the bed, playing “The Grand Old Duke of York,” and he must have grown a bit, because he had just a bit more weight and as I flipped my legs up, his legs flew up and then over his head, and I kept a hold of his hands and steered him gently to land on his back next to me. I remember thinking, “Don’t freak out,” because then he won’t freak out. And, that worked, actually.

Reid was having a hard time all day, even at the park he kept coming back to sit in my lap, curled up and secure against scary Amelie, a new 10 month old friend with two straight shocks of pigtails sprouting from the top of her head. They reached for the same block, confused when another chubby baby hand grabbed it first. We sat in Washington Square park for about two hours, neighbor friends came and went.

That night, my sister showed up and we didn’t have time to chat. When I returned home, I told her about the goose egg, but she didn’t even notice! I felt like less of a horrible mother. Boo slept like a rock star that night- literally like he’d been out on a bender. Only one 5am wake-up, and it was so quiet I woke up a few times amazed at my good luck!

The guys who hang out back from La Rocca’s all sympathized. I was walking back from daycare carrying buddy, and all the guys- grizzled 5 or 6 smokers hanging out back of this dive bar, asking how their “landlord” is doing. It’s their joke on how the young will run the world, I think. I’m not sure I understand much of what these guys say. The owner mumbled another joke about Reid needing baby Prozac because he’s staring at him so much (?). Reid also got some more sympathy from the local cafe barista. Kevin kissed his head about a million times this morning. The only one immune to the charm is Umlaut, my cat.

OK, since you asked, the most amazing part of my baby lately is how a row of curls curl up identically on the back of his head, like a little wave of baby hair.