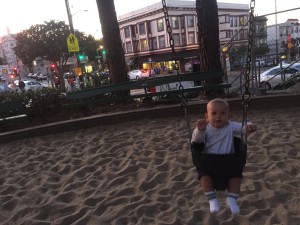 Jax picked up a fistful of sand and placed it carefully in his mouth, eying it, and his mother across the sandbox, simultaneously. She was heads down on her phone, both thumbs furiously tapping. He stuck out his tongue, layered in sand, and started wailing. She glanced at him, shoved the phone in her pocket, casually leaned over, wiped his mouth, then leaned back, getting out her phone and returning to the furious tapping. Jax grabbed another fistful of sand, slowly bringing it to his mouth, flicking his eyes from his hand, back to his mom. His second wail filled the air.

Francesca watched this while lightly bouncing on her knee 9-month Astrid, her latest charge. She also watched toddlers Franco, Bianca, Jack, and Nicolas run around the neighborhood’s playground. She did her parent pick-up at the park, which was convenient for her, as the kids were at their most difficult five minutes before their parents arrived. And, at this time, coming out of work and guilt-ridden, their parents were full to the brim with love and patience. There were always a few nannies, moms and dads around when she did the pickup. She had seen Jax and his mom before. The mom was a classic stay at home- Francesca admired how she’d worked out a way to watch her son and curb her boredom. Funny, she was sure if she asked, the mom would poo-poo daycare, stating something along the lines of the most “precious time of his life,” and her desire to “make the most” of it.

Francesca didn’t glamorize childcare- no, she spent her days wiping noses and shoveling purée. But her decision to stay at home with her daughter, and start a daycare was purely economic- she had a rent control flat and could make more than 7K a month with a full house. And, she was skilled. She grew up in her mother’s daycare in Italy. Sure, America was different, but raising kids was the same everywhere. She had to deal with precious breast milk and cloth diapers, organic this and hemp that, but otherwise, the games and songs, the same sleeping techniques, were universal. She wasn’t sure how long she could do it. Already the routine was getting to her.

Louis tapped her on the shoulder- unfortunately, Astrid had a drop-dead gorgeous parent. With sparkly eyes and an ex-football player’s body, she was eager to let hot dad and his infant daughter jump the 10 person waiting list and take latest open spot. She would make up some lie to cover it – if parents actually confronted her. She found US parents avoided confrontation like the plague.

“Here’s daddy!” She gently passed baby Astrid into Louis’ arms, a dopey endearing smile plastered all over his face. She had yet to meet Mrs. Louis, and he hadn’t listed another parent on the sign-up sheet.

“Aw, how is my little boo-boo?” As if on cue, Astrid gurgled and nuzzled his neck. Louis held her easily, gently scooped against his chest. The little girl looked possessive and adoringly up at her father. “Did she eat enough? How many naps?”

“Two naps and she loves the minestrone we had for lunch.” Francesca tickled the baby gently on her belly, then stood blatantly staring and appreciating the beautiful picture before her.

“Um, anything else?” Louis raised an eyebrow.

“Nope! Ha ha.” Francesca nervously caught herself staring, and started gathering the baby’s things. She gently put the diaper bag on Louis’ arm and then gave them a small wave, regretfully moving on to a less attractive and more nervous parent, Jillian, mother of Bianca, who was always a bit hyper and anxious after work, stressing about low breastmilk and the latest snot color coming out of rolly polly Bianca’s nose. Francesca made a mental note that she should put some distance between herself and this guy. Not only would her husband object, but she didn’t like turning into a giggling schoolgirl in front of her other clients.